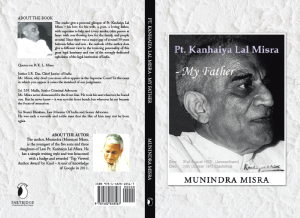 Sir Auther Quinal Quach, Author:
It is the Englishman who has conquered India but it is only an Indian (K.L. Misra) who has conquered English
Justice S.R. Das, Chief Justice of India
Mr. Misra, why don’t you more often appear in the Supreme Court? In the cases in which you appear it raises the standard of our judgments.
Mr. Sheerwai, Senior Advocate
When Mr. Misra arrived and we had consultations, he was quite. I thought the bulk of the argument is going to fall on my shoulders. But after hearing his brilliant arguments for several days, my feeling is, even if I add something more than what has been submitted, I would only be able to scratch or wash off the beautiful varnish put by him.
Sri. S.N. Mulla, Senior Criminal Advocate
Mr. Misra never clamoured for the front line. He took his seat wherever he found one. But he never knew – it was not the front bench but wherever he sat became the focus of attraction.
Sri Shanti Bhushan, Law Minister Of India and Senior Advocate
He was such a versatile and noble man that the like of him may not be born again.
The reader gets a personal glimpse of Pt. Kanhaiya Lal Misra – his love for his wife, a poet, a loving father, with eagerness to help and a very tender, calm person at heart with over-flowing love for the family and people around.
Since there was a major gap of around 50 years between father and son – the outlook of the author does give a different view to the towering personality of this great legal luminary and one of the strongly dedicated upholders of the legal institution of India.

The author, Munindra Misra, is the youngest of the five sons and three daughters of Late Pt. Kanhaiya Lal Misra.
He has been honoured with a badge and awarded ‘The Top Viewed Author Award’ by Knol – A unit of knowledge of Google in 2011. Poem written on her by Pt. K.L. Misra

Required
paper coverage/clipping/articles on Pt. K.L. Misra. Anyone having any material on him –
photographs/articles etc. do send them over at klmisra@yahoo.co.in. Thanks.

CONTEMPT OF COURT: THE NEED FOR A FRESH LOOK

In this connection I may refer to the speech delivered on 19.2.1968 by Mr.K.L. Misra, the then Advocate General of U.P. on the demise of my grandfather, Late Dr.K.N. Katju in which he said:

“No leadership of the Bar, at least in those days, was possible without the background of a deep scholarship and learning of law. I remember, very vividly, his coming back to the Bar, after incarceration of about 3 or 4 years, late in 1943, when he sat down, in a corner of the Advocates Association, and then, within a few days, read through cases decided by the British Courts during the time of his absence from the Bar. I went near him. He called me and put before me a judgment of the King’s Bench Division, which I read with absorbing interest, the very learned discussion in the judgment on the difference between “value” and “price”.
Dr.Katju asked me: “what is the significant thing you have noticed about this judgment”. I read it again before him and tried to tell him what the gist of the judgment was. He said: “No, no; look at the date of the judgment.” He then pointed out to me that the date, on which the judgment was delivered, with that scholarly and cloistered detachment, fell during the days when the German Air Force – its bomber squadron – were spreading widespread devastation and destruction in England. He told me that this detachment makes up the mentality of a true Judge.”

Required
paper coverage/clipping/articles on Pt. K.L. Misra after his demise on
14 October 1975. Anyone having any material on him –
photographs/articles etc. do send them over at klmisra@yahoo.co.in. Thanks.

“During our younger days, the junior members of the Bar got together and formed a Cricket Club. They had an annual match on the Republic day between the members of the High Court Bench and Bar against the members of the Bench and Bar of the District Court at Allahabad. It used to be great fun. The Matches were keenly contested and we had a galaxy of
old and renowned cricketers acting as Umpires. Chief Justice Mootham
was an automatic choice as Umpire. One day he was the Umpire at the
Bowler’s end and I had just bowled to the batsman, Shri S.N. Varma,
who made it into a half volley and drove it hard to the mid-off where
Justice James was fielding. In his younger days he was a reputed
hockey goalkeeper (his brother was member of the 1932 Indian Olympic
Hockey Team). Justice James, who perhaps forgot that he was not a goalkeeper and tried to block the ball with his legs instead of taking a hard catch with his hands. The ball hit his knee-cap on the right leg and there was loud noise. We were deeply concerned and thought that a bone must have cracked or broken.
While Justice James was receiving some immediate first aid, Justice
Mootham walked up to him and when he realised that it was not a
serious matter, he turned round to Shri Varma and asked him `has been
dismissing too many of your appeals?’

Required
paper coverage/clipping/articles on Pt. K.L. Misra. Anyone having any material on him –
photographs/articles etc. do send them over at klmisra@yahoo.co.in. Thanks.